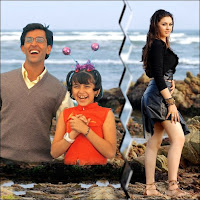 We are talking about little naughty girl that is Hansika Motwani. she got first break mehul kumar’s “jaago”. the film on the true events,told the story of a 10year old Mently challenged Girl. She has also done films like Hawa and Escape from Taliban Hansika will be making her debut as a heroine in Puri Jagannadh’s Telugu film, Desa Muduru opposite Allu Arjun. The film is about a reporter who falls in love with a sannyasi, played by Hansika. Hansika comes in light for her bollywood film Aap Ka Suroorthe real love story directed by vijay taneja opposite himesh reshmiya She palyed several role several serial like “Des Me Nikla Hoga Chand” Serial on Star Plus, kyunki saas bhi kabhi bahu thi, sony tv hum 2 hai na and tum bin in zee tv.

It is the new way to present the example in front of all singers, it is all about the Bam Lahiri song of kailash kher with the number creativity in the song. This song is all about conversation between Shankar Bhagwan & Parvati, how they are talking “meri ek suno antaryami, meri ek suno bhole swami, mai to pyasi janam janam ke“. Video is also amazing as song.