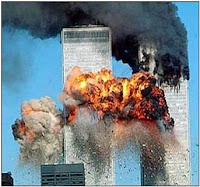 The September 11 attacks were a series of coordinated suicide attacks by Al-Qaeda upon the United States on September 11, 2001. On that morning, 19 Al-Qaeda terrorists hijacked four commercial passenger jet airliners. The hijackers intentionally crashed two of the airliners into the Twin Towers of the World Trade Center in New York City, killing everyone on board and many others working in the buildings. Both buildings collapsed within two hours, destroying nearby buildings and damaging others. The hijackers crashed a third airliner into the Pentagon in Arlington, Virginia, just outside of Washington, D.C. The fourth plane crashed into a field near Shanksville in rural Pennsylvania, after some of its passengers and flight crew attempted to retake control of the plane, which the hijackers had redirected toward Washington, D.C. There were no survivors from any of the flights. In total 2,974 victims and the 19 hijackers died in the attacks.
The United States responded to the attacks by launching a “War on Terrorism”; invading Afghanistan to depose the Taliban, who had harbored al-Qaeda terrorists; and invading Iraq to dispose of Saddam Hussein and Iraq’s supposed stock of weapons of mass destruction. However, with the exception of chemical weapon traces left over from the Iran-Iraq War, no such weapons have been found. The US also enacted the USA PATRIOT Act, while many other countries strengthened their anti-terrorism legislation and expanded law enforcement powers. Some American stock exchanges stayed closed for the rest of the week following the attack, and posted enormous losses upon reopening, especially in the airline and insurance industries. The destruction of billions of dollars worth of office space caused serious damage to the economy of Lower Manhattan.
The motive of this huge incident was to create terror in hearts of the citizens and people all over the world. Many people lost their lives in this incident. The security was increased after this incident in the whole world.
The attack killed nearly 3,000 people on September 11th alone. Of course, thousands more would die in the ensuing attacks and occupations of Afghanistan and Iraq, both predicated on the 9/11/01 attack. Thousands more might eventually die prematurely from exposure to the toxic dust and gases that emanated from Ground Zero for months after the World Trade Center bombing. The pentagon was destroyed in the attack by the hijackers. The whole world was under great terror.
Why did innocent suffered?
Numerous incidents of harassment and hate crimes were reported against Middle Easterners and other “Middle Eastern-looking” people in the days following the 9/11 attacks. Sikhs were also targeted because Sikh males usually wear turbans. There were reports of verbal abuse, attacks on mosques and other religious buildings (including the firebombing of a Hindu temple) and assaults on people, including one murder: Balbir Singh Sodhi was fatally shot on September 15, 2001. He, like others, was a Sikh who was mistaken for a Muslim.

According to a study by Ball State University, people perceived to be Middle Eastern were as likely to be victims of hate crimes as followers of Islam during this time. The study also found a similar increase in hate crimes against people who may have been perceived as members of Islam, Arabs and others thought to be of Middle Eastern origin.
What is the situation after 8 years?
Today also some people are being harassed by the Americans they suspect each and every person. Few days ago famous actor shah rukh khan was detained at Newark airport. Khan, 43, was stopped and questioned at Newark airport on his arrival from India for about two hours on Saturday and was released only after the Indian consulate intervened, an incident that caused widespread anger in India with the government saying it would take up the issue with the US. Indeed after 9/11, there has been a tab on Muslims migration to US. Many innocent Muslims are being frisked.
I agree that it is the responsibility of the country to avoid mis-happenings. But why those were harassed who were innocent and had done nothing, their fault was only that they were of other caste, they looked different?
How long will the innocent people suffer?
Why all people are thought to be Terrorist?
Things have changed drastically after September 11, 2001 world is facing huge terror in many parts. Still world is under the terror of 9/11, 2001. Come let us find out how the terrorism gets end. Please give your opinion…………………..
Numbers of people are being affected by the “swine flu”. From nine years old child to old citizens. The swine influenza A (H1N1) virus that has infected humans. Investigations of these cases suggest that on-going human-to-human swine influenza A (H1N1) virus is occurring. Many countries are under the threat of this disease known as” H1N1”. Countries like London, Mexico, India, and Singapore. 168 numbers of countries across the world are suffering H1N1. This flu is curable and is preventive by medications and by wearing face mask. Staying away from crowd, having distance from a person who is having cold, fever, since few days, wash hands in few period of time.
“Symptoms of swine flu”

Fear of suffering is next only to fear of death. Although uncomplicated influenza-like illness (fever, cough or sore throat) has been reported in many cases, mild respiratory illness (nasal congestion) without fever and occasional severe disease also has been reported. Other symptoms reported with swine influenza. A virus infection include vomiting, diarrhea, malign, headache, chills, fatigue, and dyspnea. Conjunctivitis is rare, but has been reported. Severe disease (pneumonia, respiratory failure) and fatal outcomes have been reported with swine influenza a virus infection. The symptoms can be reduced by taking Doctor’s guidance.
“Swine flu infection control”

Separation from others in single room if available. If the ill person needs to move to another part of the house, they should wear a mask. The ill person should be encouraged to wash hand frequently and follow respiratory hygiene practices. Cups and other utensils used by the ill person should be thoroughly washed with soap and water before use by other persons.
“How many people will have to pay their life”?

Innocent kids, old citizen’s people are losing their life’s day by day the number is increasing. Lack of knowledge about the disease, less screening test centre’s in cities, government is promising that on airport proper test is being taken of the people coming from foreign , it’s now the government has started taking test’s but few days ago if these steps would have been taken then a guy from Ahmadabad who lost his life would had been saved. As first case was found of H1N1 was found government of country should have taken strict action against it then many people would have been saved from the disease and death. Now also government is only promising that they have started taking decision against the threat but no one can find any change. A doctor lost his life because he did not have proper knowledge of his disease.