Skip to content
Firstly  Sachin Tendlkar then Mukesh Ambani, Aamir Khan Shah Rukh Khan now its Saif Ali Khan and Rahul Gandhi. Shiv Sena always criticizes people who believe that they are firstly an”Indian”. After targeting Bollywood superstar Shah Rukh Khan for his remarks supporting the inclusion of Pakistani cricketers in the IPL, the Shiv Sena Saturday dragged in Aamir Khan, calling the duo “2 Idiots”. Aamir had said Friday that if he were to select IPL players he would do so only on the basis of their performance and not nationality.
Rahul Gandhi a youth icon for India for future.Who rescued Mumbai during 26/11? The NSG commandos came to Mumbai’s rescue and most of them came from Bihar and Uttar Pradesh,” He opposed Shiv Sena by commenting that in Mumbai attacks north Indians saved the life of Mumbaikars. 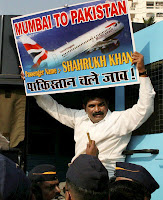 Reacting to Rahul Gandhi’s earlier comments on Shiv Sena, in the Sena mouthpiece Saamana, Uddhav Thakeray on Tuesday said Rahul’s comments have insulted the martyrs of 26/11. An issue by Shiv Sena. Shiv Sena believes that Mumbai belongs to Marathi people and north Indians don’t have right on Mumbai. Shiv Sena and MNS believes that people who are born in Maharashtra should only be allowed to work and people who are north Indians should work in their own states.
RSS, the Sangh parivar  has asked its volunteers to protect north Indians in Maharashtra and prevent spread of anti-Hindi feelings. Bhagwat had said yesterday, “Mumbai is for all Indians. People of all languages, communities, tribes are children of India. Nobody can prevent Indians from moving to any part of the country in search of employment.”
Udhhav Thackeray said as Indians are being treated badly in Australia, it would not be apt to allow Australians to play in India. The Sena working president threatened that it would not allow matches to be held if the Australians play. He said the orders to this effect have come from Sena supremo Bal Thackeray.
Shah Rukh asserted he believed that every Indian would agree that India is a “good country” and that “everyone is welcome as a guest”, but at the same time said too much importance was being attached to the words of “just an actor”.
“It makes me feel that activities like this are unhealthy, undemocratic, its insensitive but this is the world is and you can only say what you believe in and stand by it and hopefully I will have the strength to do so,” Khan told reporters when asked about the Shiv Sena protests back home. “As an Indian I’m not ashamed, guilty or unhappy about what I said neither am I sorry,” he said.
Is this What we are going to give our generations?
Does language or Religion more than being an Indian?