Skip to content
India is very huge country in terms of population and it is known that people here are poor and don’t have money to educate their kids. New education bill will provide education to children between 6-14 years of age, the task of implementing and enforcing thus will be handed over to state governments.The law came into effect in the whole of India except the state of Jammu and Kashmir from 1 April 2010, the first time in the history of India a law was brought into force by a speech by the Prime Minister. In his speech, Manmohan Singh, Prime Minister of India stated that, “We are committed to ensuring that all children, irrespective of gender and social category, have access to education. An education that enables them to acquire the skills, knowledge, values and attitudes necessary to become responsible and active citizens of India. 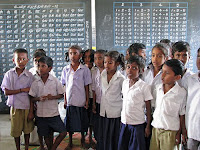 The Act makes education a fundamental right of every child between the ages of 6 to 14 and specifies minimum norms in government schools. It requires the reservation of 25% of places in private schools for children from poor families, prohibits unrecognized schools from practice, and makes provisions for no donation or capitation fees and no interview of the child or parent for admission. The Act also provides that no child shall be held back, expelled, or required to pass a board examination until the completion of elementary education. There is also a provision for special training of school drop-outs to bring them up to par with students of the same age. The Right to Education of persons with disabilities until 18 years of age has also been made a fundamental right.
We can see that in some rural areas girls are not allowed to go school as family members believe that they have to remain in home and do house work so they don’t need education. In some places families are have weak financial position and they push their kids to work and earn money.
*6-14 years of age children compulsory and free education.
*No student be held back to advance, failed by board or expelled till class Vlll.
*There must be 25% reservation in private as well as government schools for poor.
*There must be one teacher for 30 students.
*Involvement of students parents in school’s administration.
1.78Lakh Crore money required to implement the act. for next 5 years.

Government schools can execute this bill easily but schools which are private and earn money by donations, other various things they won’t agree on this law to be imposed on them.

How private schools handle this bill?

Will private schools take into action this law or protest?

Will poor kids of rural and urban areas be educated by this bill passed by Government?