Skip to content
IPL matches started with grand opening by National and International singers and superstars. Game started with last years strongest and winning team Deccan Charger against the weakest  team Kolkata Knight Riders. Saurav Ganguly the skipper of KKR was not able to make runs but being a skipper he carried out his responsibility very well and this was just the beginning of the matches. If T20 is all about momentum then KKR has begun with just the right start. But soon KKR started loosing matches one-by-one and now it is out of IPL-3. 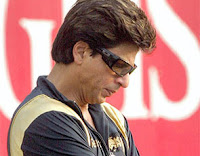 KKR looked very strong and powerful team in beginning of IPL-3 but soon they lost each and every match either by their worst performance or by their bad luck. Now the team skipper and owner Shah Rukh Khan both looked disappointed by their players. Matches are not won by single man but it is won by the effort of whole team, their trust upon each other and hard work.
Kolkata Knight Riders team of Shah Rukh Khan is now out from the battle of IPL-3.
Shah Rukh Khan and Saurav Ganguly again seemed to be with weak team and players.