Skip to content
India is a developing country and people here work hard but still there is poverty. Government of India passes many laws and bills for poor people but they never execute it in real life and if executed proper help does not reaches the poor one’s. Rural populations primarily depend on agriculture, which is highly dependant on rain patterns and the monsoon season. Inadequate rain and improper irrigation facilities can obviously cause low, or in some cases, no production of crops. The government has planned and implemented poverty eradication programs, but the benefits of all these programs hardly reach to poor people of the country.
The cereals and pulses that are stored by government for poor people does not reaches them on time if they reach they are not in condition to eat. Sometimes government exports pulses to earn profit without seeing that in their own country there is a shortage and poor one’s are dying. But our government is sleeping or we can say they just want to have money not development of country. They want to full their bank accounts not poor people’s stomach.

Rajiv Gandhi once said that out of 100 paisa allocated for poor only 14 paisa reaches them.
Some basic reasons of Rural poverty in India are:-
The causes of Urban poverty in India are:-
The steps taken by government to remove urban poverty are:
Poor people beg on streets, and in markets so that they can earn without doing work. These poor people thinks that being illiterate they won’t get work easily. If women’s try to do some house hold work or in small scale or handicraft industry they are exploited or harassed sexually or abused if they protest. 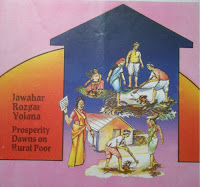 A woman begs in the name of her husband who is in the death bed in a hospital, it is not uncommon that the husband is begging in his wife’s name on the next street. A pregnant woman will say that her previous child has died, and she needs money for the funeral.
The difference of communication between the central government and the state government often results in the lack of implementation of these policies. So it is very important that the governments do not play power politics when it comes to a serious issue such as poverty. There is a need for the state to move out of many areas and the process has been started with economic liberalization.
Will Government wake up from this sleep?

How poverty can be removed by common man?